Last night we said a fond but tearful farewell to Colin, the hog we have in our care longer than any other.

He came to us as a juvenile aged approx 4-5 months on the evening of 23rd August 2018, after being trapped between two brick walls below ground level for five days. He appeared to have walked along or climbed over a garden wall and fallen into the 6inch gap behind, trapping him against a garage wall. In that time he had tried frantically to climb out, but at a depth of around 3ft below the garden level this was impossible. The frantic scratching to climb out resulted in him losing all the claws on his front feet and the tip of some of the toes.

He had spent those five days absolutely shrieking in fear and pain – a sound the householder thought was an “unusual bird calling”. It was only when it went on for so long both day and night that they eventually traced the sound and found poor Colin!

The call for help came in via the RSPCA to Wildlife in Need as they were dealing with another emergency and could not attend. Tracy went at once to rescue Colin. His spines were all broken, his skin was torn and all his feet were bleeding and infected. He was emaciated, terribly dehydrated, covered in fly strike and close to collapse.

After being rushed to the out of hours vet to have his wounds checked over, he came back to us the same night for his long rehabilitation.

It took several hours to clean the fly strike off and he seemed to know we were helping and even rolled onto his back to allow us to clean his tummy. He accepted his daily medicated baths without fuss and as his toes began to dry up and fall off we feared the worst for him. Hedgehogs need their front feet to dig for worms and bugs to eat. Without toes or claws he would not survive in the wild.

The weeks passed and the wounds on his head and body began to heal, but still no sign of his toes healing so well. By the end of October we were considering having him put to sleep, but his stoical character persuaded us to give him a little more time.

By Christmas we took the decision to allow him to hibernate. This not only relieved him of the stress of being in captivity (which all hedgehogs get), but also to give his body time to rest and recharge.

He spent weeks at a time in torpor, only waking for one night here and there to eat some food or take a drink of water and back to sleep again. Of the hogs who hibernated with us, he slept the longest of them all by many weeks. His body was clearly in need of the rest.

During that time we could not check the progress of his feet as he was rolled into a tight ball, but regular checks on his weight gave us no cause for concern.

Over the last 8 or 9 weeks since he has been fully awake, his feet have made a sudden and amazing regrowth. All the tips of his toes except one on each of his front feet have regrown, and the claws have finally made their appearance. He awoke from hibernation as a new Colin – a fiesty one who would huff and puff when handled. He would not unroll to have his feet fully checked and he would run and hide in his nest at the sound of human feet outside his hutch when we went to check on him or fill his dishes.

In other words he had returned to how a wild hedgehog should be – wary of humans, of sudden noise and of what he perceived to be a threat to him. We were overjoyed!

In the last few weeks he has had his feet fully checked and apart from the very tip of two toes and the claws missing, his feet are now as good as new. He has been able to forage and dig for bugs in his pen every night and watching him, you would never know he is missing a toe. He came very close at times to digging himself an escape tunnel, so his loss of the toes has really not hampered him at all !

As it was felt unsafe for him to return to his original home, we decided to release him in our own garden. He may hang around for a while, or he may never be seen by us again if he chooses to leave the garden and wander off. Either way is fine with us. Our work with the bravest soul that is Colin is done and the rest is up to him.

It’s a tough world for hedgehogs, not least of the many problems put in their way by we humans – but we know he is a strong little guy and if anyone can make it out there despite the hazards, then he can.

Stay safe Colin! We shall miss you!

Comet is a young adult hog who was found hibernating under a shed that was being demolished. We put him 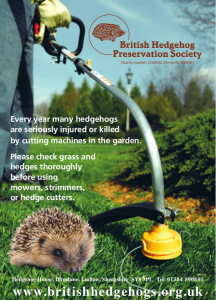 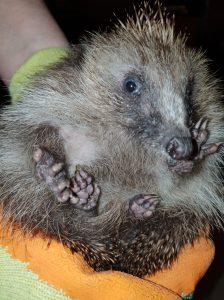 Not so little Victoria is one of our hand reared litters from the autumn, somewhat different in size now than The helpline is available 24/7. Please check our FAQs before calling.

We use cookies on our website to give you the most relevant experience by remembering your preferences and repeat visits. By clicking “Accept”, you consent to the use of ALL the cookies.
Cookie settingsACCEPT Read More
Manage consent

This website uses cookies to improve your experience while you navigate through the website. Out of these, the cookies that are categorized as necessary are stored on your browser as they are essential for the working of basic functionalities of the website. We also use third-party cookies that help us analyze and understand how you use this website. These cookies will be stored in your browser only with your consent. You also have the option to opt-out of these cookies. But opting out of some of these cookies may affect your browsing experience.
Necessary Always Enabled
Necessary cookies are absolutely essential for the website to function properly. This category only includes cookies that ensures basic functionalities and security features of the website. These cookies do not store any personal information.
Functional
Functional cookies help to perform certain functionalities like sharing the content of the website on social media platforms, collect feedbacks, and other third-party features.
Performance
Performance cookies are used to understand and analyze the key performance indexes of the website which helps in delivering a better user experience for the visitors.
Analytics
Analytical cookies are used to understand how visitors interact with the website. These cookies help provide information on metrics the number of visitors, bounce rate, traffic source, etc.
Advertisement
Advertisement cookies are used to provide visitors with relevant ads and marketing campaigns. These cookies track visitors across websites and collect information to provide customized ads.
Others
Other uncategorized cookies are those that are being analyzed and have not been classified into a category as yet.
SAVE & ACCEPT
Powered by